Case Study: The importance of planning for TPLO

“Failing to plan is planning to fail”

VetPrac thanks Dr James Simcock, one of the educators at the upcoming VetPrac TPLO workshop, for providing this case study of a tibial crest avulsion fracture following TPLO procedure.

VetPrac’s 2019 TPLO Workshop is at capacity. We are coordinating a Patella & Stifle Surgery workshop in June 2020. Join our VIP Waitlist to receive early opportunity to register before enrolments are to everyone else.

A 4YO male castrated ridgeback cross presented with an acute onset of right pelvic limb lameness. The pain was isolated to the stifle. Effusion, buttress and cranial drawer were palpable in the stifle. Radiographs were taken of the right stifle and were consistent with cranial cruciate ligament rupture. Stifle arthroscopy confirmed that the cranial cruciate ligament was ruptured. The medial meniscus was normal and no meniscal release was performed. The remainder of the joint was considered normal. A TPLO was performed; during the procedure, challenges were noted maintaining appropriate rotation of the proximal segment. This required a second anti-rotational pin to be placed through the tibial crest. The post operative radiographs are shown in Figure 1.

Two weeks following surgery the owners re-presented due to acute onset lameness following a period of activity (leash walks). On clinical examination there was pain with ROM of the stifle and palpation over the tibial crest. Radiographs were made of the stifle (Figure 2) that revealed a minimally displaced fracture through the tibial crest. Due to the non- displaced nature of this fracture it was elected to manage this conservatively with strict activity restriction (5 min leash walks only). The lameness improved and no further treatment was required. Eight-week post operative radiographs were made (Figure 3) and revealed that the tibial crest fracture had migrated proximally a small amount but appeared to be healing. 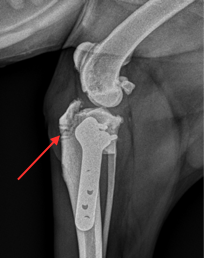 Tibial crest fracture is a noted complication following TPLO. It is reported to occur between 0.4 – 4.8% of cases.1 Numerous risk factors have been identified that increase the risk of tibial tuberosity fracture.1,2,3

FIGURE 3: Six week post operative radiograph. The tibial osteotomy is healing as expected, the tibial crest has displaced a small amount proximally but the fracture appears to be healing (red arrow).

Another commonly cited risk for tibial tuberosity fracture is rotation of the proximal segment past the theoretical ‘safe point’ of the insertion of the patella tendon on the tibial tuberosity. Rotation of this magnitude is occasionally required when there is a relatively high tibial plateau angle and/or there is a relatively high insertion point of the patella tendon. Numerous studies have shown that rotation past this safe point is not an increased risk of fracture. 1,4,5

In the case presented, placement of multiple pins below the insertion of the patella tendon has likely contributed to the tibial tuberosity fracture that was identified.

Like all things in surgery it’s possible to ‘break the rules’ or ignore risk factors and still have a good outcome – ‘get away with it’. It is important not to be lulled into a false sense of security if and when this happens. If you continue to perform surgery and not adhere to the recommendations then eventually you will experience a complication. In addition, if you break more than one of the rules then the risk of a complication will likely increase. In the case of tibial tuberosity fracture following TPLO if you place the anti-rotational pin below the insertion of the patella tendon this might be ok if the width of the tibial crest is very wide compared to its height. However, if your cut is too low and/or cranial making the tibial crest height relatively high compared to the width then this is likely to further increase the risk of fracture.

TPLO is a technically challenging procedure that can be performed safely if the recommended guidelines are followed. When learning this procedure it is important to follow the recommendations and be aware of possible complications and their associated risk factors (if known). Most of the complications that result in failure of the construct or fracture of the bone are related to technical issues when the surgery is performed.

When learning to perform TPLO careful planning of the procedure is an essential part of getting it right and having consistently good results. Remember that the proximal tibial morphology/shape can vary dramatically between patients and this can have an impact on planning of the procedure and where the osteotomy is positioned. It is important to accurately measure the tibial plateau angle, be aware of the insertion point of the patella tendon (low or high), assess if there is a scalloped shape to the proximal tibial crest, identify concurrent medial patella luxation and to assess for excessive valgus/varus, internal/external rotation of the tibia.

VetPrac’s 2019 TPLO Workshop is at capacity. We are coordinating a Patella & Stifle Surgery workshop in June 2020. Join our VIP Waitlist to receive early opportunity to register before enrolments are to everyone else.